On Monday, June 15, 2020, the United States Supreme Court issued a decision which extended workplace protections to millions of people across the United States. Justice Gorsuch, writing for a 6-3 majority, ruled that federal law prevents employers from firing workers for being lesbian, gay, bisexual or transgender.

The decision was an explanation as much as a ruling about the Civil Rights Act of 1964. He wrote that, “in Title VII, Congress outlawed discrimination in the workplace on the basis of race, color, religion, sex, or national origin.” Title VII’s prohibition of sex discrimination in employment is a major piece of federal civil rights legislation. In the decision, the court was called upon to “decide whether an employer can fire someone simply for being homosexual or transgender.” The Court ruled that “an employer who fires an individual for being homosexual or transgender fires that person for traits or actions it would not have questioned in members of a different sex. Sex plays a necessary and undisguisable role in the decision, exactly what Title VII forbids.”

How did the Court, as explained by Justice Gorsuch, reach its conclusion? The Judge set out some guideposts. “These cases involve no more than the straightforward application of legal terms with plain and settled meanings,” wrote the Justice. He notes that the statute prohibits employers from taking certain actions “because of” sex. The statute imposes liability only when employers “fail or refuse to hire, discharge or otherwise discriminate against someone because of a protected characteristic like sex.”

Sex, according to the Justice, referred to biological distinctions between male and female. What did discriminate mean? “To discriminate against a person, then, would seem to mean treating that individual worse than others who are similarly situated.”

Taking these meanings together, the Justice wrote: “An employer violates Title VII when it intentionally fires an individual based in part on sex.” There can be other reasons but if the firing is based, in part, on sex then it is in violation of the federal law.

The decision and its rationale were explained by examples, perhaps none better than this. Justice Gorsuch wrote that:  “. . . it is impossible to discriminate against a person for being homosexual or transgender without discriminating against that individual based on sex. Consider, for example, an employer with two employees, both of whom are attracted to men. The two individuals are, in the employer’s mind, materially identical in all respects, except that one is a man and the other a woman. If the employer fires the male employee for no reason other than the fact he is attracted to men, the employer discriminates against him for traits or actions it tolerates in his female colleague.”

Consider, Justice Gorsuch wrote, “an employer with a policy of firing any woman he discovers to be a Yankees fan. Carrying out that rule because an employee is a woman AND a fan of the Yankees is a firing “because of sex” if the employer would have tolerated the same allegiance in a male employee.”

This is not intended to be legal advice.  You should contact an attorney for advice regarding your specific situation. 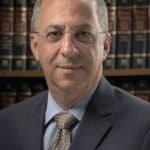 is Senior Counsel and primary attorney in charge of civil litigation and Personal Injury at J&G.

He is available by appointment on Saturday’s.

If you need his immediate attention, you can reach him on cell.