PRESIDENTIAL CHESS:  PLAYING THE LONG GAME WITH APPOINTMENT OF JUSTICES TO THE SUPREME COURT

Article III of the Constitution created the authority for a Supreme Court of the United States, but the composition of the Court was left to the discretion of Congress.  The Judiciary Act of 1789 proclaimed that the Supreme Court would be a six-member body with one Chief Justice and five Associate Justices.  A majority vote in both houses of Congress and Presidential approval are required to change the number judges.  Since its founding, the number of Justices has changed seven times and fluctuated between an apex of ten justices and a nadir of five.[1]  The Circuit Justices Act of 1869 fixed the number of Justices at nine where it has stayed for over 150 years.

Surprisingly, there are no qualifications for appointment to the Supreme Court.  A nominee is not even required to be a practicing lawyer or a law school graduate.[2]  All that is required is a Presidential nomination and a simple majority vote in the Senate.  Nevertheless, each of the appointed Justices was trained in the law[3] and came to the Court with an invaluable wealth of experience.  Once confirmed, a Supreme Court Justice has a lifetime appointment[4] subject to a single caveat.  Article III, Section 1 of the Constitution provides that Justices “shall hold their offices during good behaviour” but may be subject to impeachment proceedings for a breach of their sacred duty.  However, no Justice has actually been removed from office.[5]

Currently, the average age that a Supreme Court Justice leaves the bench is 81.  Thus, it is reasonable to expect that as national life expectancy increases, so will the average age of retirement.  As the average term length of a sitting Justice is trending upwards, the selection of appointees has become more consequential.  In the last 30 years,  thirteen of the last eighteen appointments to the Court were made by Republican Presidents[6] with only five by Democrats.[7]  Six of the current sitting Justices were appointed by either President Donald J. Trump[8] or one of the two Bush Presidents.[9]

While in recent history the Supreme Court had been dominated by Republican-appointed Justices, the balance had been shifting towards a more neutral composition.  President William J. Clinton’s 1994 appointment of Justice Samuel G. Breyer to replace Justice Harry A. Blackmun started the trend, changing the composition from an 8-1 Court dominated by Republican appointees to a 7-2 Court.  President Barak Obama’s appointments of Justice Sonia Sotomayor (2009) to replace Justice David H. Souter and Justice Elena Kagan (2010) to replace Justice John Paul Stevens pushed the composition of the court to 5-4.  However, the trend was reversed when three seats became vacant during the Trump presidency.  President Trump’s appointment of Justice Amy Coney Barret as successor to Justice Ginsburg saw the Court’s composition shift back to a 6-3 majority of Republican appointees.

Recently, Justice Breyer announced he will retire at the end of the 2021-2022 Supreme Court Term in October at age 84 and President Joe Biden was given the honor of nominanting Justice Breyer’s successor.  Given the Court’s composition, it is reasonable to suspect that age may have played a significant role in the nomination process.  After Justice Breyer, the three of the four eldest Justices were nominated by Republican Presidents.  If they retire in order, Justice Thomas (73) will be followed by Justice Alito (71), and Chief Justice Roberts (67).  If they retire at the historical retirement age of 81, these vacancies will occur in 2030, 2032, and 2036.  The next two Justices, Justice Sotomayor (67) and Justice Kagan (61), are Democratic appointees with projected retirements in 2036 and 2042.  The three youngest members are Justice Gorsuch (54), Justice Barrett (50) and Justice Kavanaugh, whose 50th Birthday was February 12, 2022.  All three were appointed by President Trump and may be expected to sit on the bench for the next 30 years.

The short list of candidates that President Biden was rumored to have considered included highly qualified women ranging in age from 43 to 59.  With the Senate deadlocked at 50 Democrats and 50 Republicans, President Biden had to tread carefully and select a nominee that every member of his party would back.  At age 51, President Biden split the difference when he announced his nominee, Ketanji Brown Jackson.  Given the nature and trajectory of the Court, we are left to wonder whether President Biden missed an opportunity to nominate a slightly younger candidate who might have been expected outlasted the three youngest Republican appointees.  Nevertheless, President Biden has made his move in the Presidential chess match and only time will tell whether his nominee will help to shift the Court back in the Democrats’ favor over the next two to three decades.

Given the nature and trajectory of the Court, it would not be surprising to see President Biden play the long game and select a nominee in her early to mid-40s creating the opportunity for one of the longest Supreme Court tenures and potentially set the stage for a shift in the composition of the Court to a majority appointed by Democratic Presidents over the course of the next two decades.

[2]     In recent history for instance, Justice James F. Byrnes (1941-1942) did not graduate high school or attend any law school.  Instead, Justice Byrnes taught himself law and passed the bar at age 23.  Similarly, Justice Robert H. Jackson (1941-1954) did not attend an undergraduate institution and while he studied law and graduated Albany Law School in 1912 at age 20, he was only awarded a “diploma of graduation” as Albany Law required its Juris Doctor candidates to be at least 21 years old.

[3]     In fact, of the last eighteen confirmed Justices, all have graduated from top-tier law schools with nine graduating from Harvard Law, four Yale graduates, two from Stanford, and the others from Northwestern, Notre Dame, and Howard University.

[5]     In fact, the sole instance when impeachment proceedings were initiated was in 1805 when the House of Representatives passed Articles of Impeachment against Associate Justice Samuel Chase who was later acquitted by the Senate.

This is not intended to be legal advise.  You should contact your attorney to discuss your specific situation. 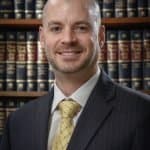 Andrew L. Boughrum, Esq. is an Associate at the firm and practices general litigation.
He can be reached at 845-764-9656 and by email.