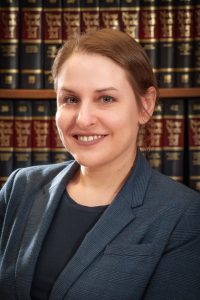 Amy is admitted to practice in New York State, the Northern District of New York, and the Second Circuit Court of Appeals.

Amy has published numerous law review articles and given presentations on a variety of topics, including ethics and civility, contentious land uses, eminent domain, wind energy development, urban property rights disputes, community benefits agreements, and more. She has been a contributing writer and editor for Salkin’s American Law of Zoning and the New York Zoning Law and Practice treatise since 2012 and has written new chapters on topics such as annexation, spot zoning, nonconforming uses, and wireless facilities zoning.

Amy majored in ecology and fine arts at Bard College at Simon’s Rock, where she received her Bachelor of Arts in 2002. Amy studied abroad at the Centre International d’Etudes Francaises in Dijon, France when she was in college, and she subsequently participated in a law school exchange program with the University of Paris X, Nanterre, where she received a Diplome des Etudes Juridiques Europeennes et Internationales. She graduated from Albany Law School in New York with a juris doctor in 2007.

Amy has a variety of interests outside of work, including reading, painting, and picture framing, and she previously operated an art supply company. She is a Newburgh resident.  She speaks English and French.