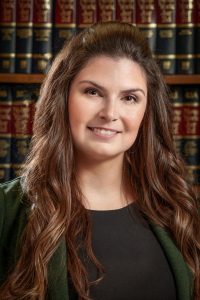 Jessica earned her Bachelor of Science in 2011 from Berkeley College in New York, New York.  She earned her Juris Doctorate in 2014 from Albany Law School in Albany, New York.  She has been in private practice since 2017 until joining J&G Law in 2022.  Jessica is a member of the New York State Bar Association and the Women’s Bar Association of Orange and Sullivan Counties.  She was admitted to the New York State Bar in 2015. Jessica has dedicated many years volunteering for several organizations including as a Peer Mentor at Berkeley College; Media Intern for Hudson Valley Council, Boy Scouts of America in Newburgh; a Cadet Executive Officer for the Junior Reserve Officer Training Corps (JROTC) in Slate Hill; and as a Police Officer Cadet Corps Command for the Orange County Sheriff’s Office in Goshen.

Jessica enjoys her time with her family, cooking and baking.